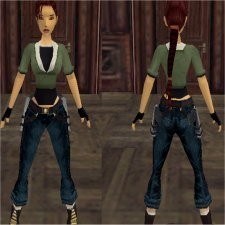 Description
springs almost here. Lara sports a green jacket with blue jeans rolled up. Head mesh is a modified version of geckokids head mesh. textures are from me.


Original: Though we don't have an outfit like this one, it still reminds me of another one, I just don't know which one. Maybe it's the shirt or the jeans, dunno what, I would give a 9.5 . ;) Quality: The wrists are added to the hands holding the pistols. You don't notice it in game, but it's still a little little minus ;) I saw no holes and bad rotated textures, so a 9. Useable: I think it's useable in many types of levels, but I would prefer it for city typed levels or city levels. Textures: I liked the jeans' ones. They were detailed and well placed, althoug I think you've used them in some other outfits before. The green shirt texture could have been a bit better, but it was nice though :) I didn't like the eye texture, Lara looks like she didn't sleep enough, they looked too small. The hair texture was good, but I think it was a little bit too much shimmer. That looked a bit un-nature, but it was okay :) Meshes: I did like the torso mesh, it was really nice! It reminds me a bit of Trinity's snowflake angel torso, but that's another one. This was the best mesh on the outfit! :) The rest of the meshes looked good, either, I just didn't like the lower leg mesh. It looked a little strange: huge trousers and a really slim leg beyond it.... Hmmm.... The socks were nice, I think it was the first outfit, where Lara is wearing socks, lol :D This was a really nice outfit, but I would just make the head better. The mesh was nice, but I would prefer other eye textures, you may take the ones from Gecko Kid's outfit. :) Keep the nice work on :)