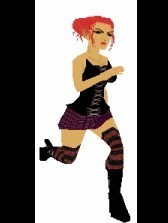 Description
A girl with a black dress, striped overknees and a skirt. Shoes by Blind Intentions, rest by me! Please review it!


It's pretty good. It looks a bit rushed so the quality is down. Textures are okay, the socks are cool. But the plain black textures were a little boring. The logo is cool tho, better then just plain black all the way. The head mesh is cool! I really like the textures for the head too. A good outfit just need a few better textures. Good job! :D


nice, and original, a touble maker (?) but it looks like many of Golden Down´s outfit. And it cant be used in almost any levels, couse its a little wierd. as the author said, the textures are bad, really bad. Plain textures. The meshes are a little wierd, the legs meshes have many polygons for nothing, they look the same compared with Laras custom legs. And many polygons makes the outfits looks bad in levels with many lights, what makes the useability gets even lower. The hip mesh in not so good couse is to big for a normal person, even for Lara. The torso mesh is just a changed version of TRANGEL´s torso, from Urban Oufit, The mesh is good, but some polygons dissapears when Lara moves. The head mesh is nice, but has some double faces. the poor textures, double side in some meshes and the polygons that dissapears some times made the quality got down It could be a really good outfit if the author used better textures and better meshes ( the meshes are fine, but they have bugs)

(02 Aug 2004 22:10)
Author Reply
You said it looks like some of my other outfits? I'd like to know which. Strange that someone says that to me who made I think 4 or 5 jungle outfits, 2 jeans outfits, which looked all the same. And the black texture. It's hard to make black look not plain and I think the textures are not as bad or poor as you said. But when someone has the aim to downrate something...