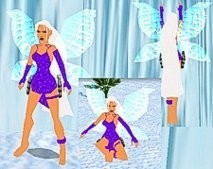 Description
A new fairy appeared at the LE. Wearing a violet dress and silver-white hair touching her knees. And of course there are wings, which simply belong to a fairy. Please do not use any of my meshes (they are all self-made and it was pretty hard work to do) - if you really need them, write me an e-mail: tifanazah@arcor.de ...


Wow, this certainly qualifies to "most creative but worst made outfit". I'll start with the meshes. First thing you notice is the "hair", which reaches the fairy's bottom legs. She appears to have used a Petrificus Totalis stiffness spell on it (I just HAD to say that!), as it's as stiff as it gets! Her legs also go though it all the time, and it passes through her lower body and skirt all the time as well, in almost every animation. The better way to make it would be to lenghten the normal ponytail, or place different parts of the hair mesh at different meshes, and joining them with joints (extra hard...). When mentioning the skirt, it's quite good, but the legs still pass through the bottom of it, as well as the "hair". The wings are beautiful, but no, the arms pass through them too! This time it's acceptible since the wings are transparent, but it's still a lower in quality. Otherwise the meshes are fine, except the feet are a bit blocky, and don't have joint attachment to the legs. Unlike the meshes, the textures are beautiful, and well made. The wings are enhanched by the textures, but I didn't like the hair texture, it was a bit plain. The suit is really cool! It appears dark purple at normal, and turns light purple when shooting or holding a flare. Underwater it's blue! Quite a cool effect, and it increases the textures rating. Overall, I don't recommend this to anybody, the hair just ruins it all. If you make a shorter haircut (like the original ponytail *hint hint*), this could probably work, but it's still stupid that Lara has wings but can't fly... [i]Edited by ChatBot[/i]


It would be cool if there was a V.2 to be out soon... The meshs were cool could be better. I think the wings could be fixed if the outer edges were set back at an angle. Then her arms would'nt go through it, maybe. The hair could be fixed if the braid was longer and wider. Or you could use a short hair verson. The textures for her dress was really nice in good lighting. Also good style, but like most dress' her legs go through it sometimes. and the textures for her a were a little bland. The textures for her wings were spectacular! I love the over all feel to this outfit, it's very good- just needs a little work. Nothing bad, just a buggy. I think it's a really good job! Great work!!! :D