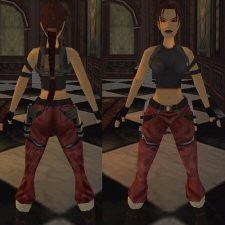 Description
This outfit is the outfit i'm using for my new level the Manor. took about 3 hours to get the textures just right.


Original: In this section, the outfit lacks. Let's take a look: First of all, you've used a head mesh that looks like this in 23 of your outfits now. I know you have modifyed it, and it looks better then the pervious ones, but it still resembles the other 23 outfits. 2nd, the head mesh looks like a strong imitation of GeckoKid's head mesh he made in 2002 for his "The begining" level. His head mesh came first, and yours came soon after that. 3rd, ok I know this is another on the head mesh, but it looks like an AOD remake. 4th, The shirt looks like it's from AOD, it even the same textures from AOD - witch have been used in not only TR6 but also in many other outfits. 5th, The pants are AOD textures, just simply re colored, or rather "Tinted" a purplish red. But it's obvious that they are from AOD - again been used from TR6 and used in many outfits. 6th, misc textures used from older outfit from this author or from TR6. Like the socks, shoes, face textures, hair. Also most meshes resemble older outfits from this author. Another thing that bothered me, (this here won't effect the outfit rating) is the fact that your using this in a imitation level of Harly Wuson's Devilish Habitats. Witch shows a very low amount of originalty over all. Possibly try somthing diffrent for a change? ;) -And so, I take one point off for each catagory. Quality: The chest mesh had one little bend face. It can only be seen from the front while Lara is moving. But that's really all that I could see. Otherwise, this has good quality. :) Useable: Other then bugs and some other small factors that might keep the outfit from being used, I think this would fit best into Home levels. Custom textures: On the left of her bum I noticed a misplaced texture a gray texture. Also the spot where her skin meets the pants on her bum mesh, her skin is bright orange. But you can only see this small thing in strpix and is not visible in game, so it does not matter all that much. And some places on the hair and belt could have used better rotations. The pants look very good though, I think you did a wonderful job in placing the leg textures. But not the bum, the pockets are higher up than normal jeans would be, and the way the textures are placed and the belt higher up makes her bum look gigantic. Very unatractive. Most of these textures, if not all, are modifyed from TR6. Custom meshes: I noticed the backpack straps sticking out, so I looked at them closer. Some straps go through the backpack, witch looks ok, but then others are only half way in and just end there, floating in the air. The belt could have also been more 3D, rather then paper thin witch makes it look unrealistic. Another thing, Lara looks about 10 - 15 pounds heavier, the stomach join is wider and her other meshes are slighty of a larger frame. For a normal woman this would be perfectly fine, but most TR players will probibly notice the increase of weight on Lara. The good things are that you have kept the outfit of a good high poly Lara. The chest mesh is well rounded, and the bum is well made too, it just looks bad with the textures making it look rather on the large side. I did'nt much care for the chuncky, stuby hands though. The head mesh is well made, I personaly don't like it, but you made itvery high poly with no holes. I have to admire the time it must have taken. ;) ---- Cons: Originality is very low and there are things that could be very much improved. Pros: Pants on the legs are great. And meshes are mostly very nice. Over all: Could be better, and it's fine in a level if you never pay close attention to the quirks in the outfit. A lovely try indeed, just a little bit of work needed to make it better. :D [i]Edited by Trinity[/i]